How to protect astronauts from space radiation

Mankind has been to the moon and back! Our next quest is to travel to Mars. But in order to prepare for the trip back to Mars we must get back to the moon. Flights to the moon will allow us to test out our methods to block SEP’s which stand for Solar Energy Particles. These particles come from the sun during solar storms or solar flares and can damage your DNA and cause cancers. When we travel outside of the Earths Magnetic Field, our exposure to SEP’s significantly increases. Protection from SEP’s during a 6-10 month trip to Mars will be very important since we will be far away from Earth’s magnetic field. Mars also lacks a magnetic field! 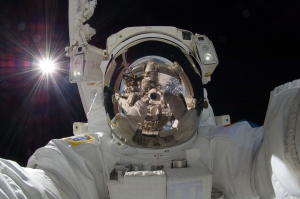 Space forecasting is a method in which people will watch the sun to track when solar flares and solar storms may bombard astronauts. Sun spots have 11 year cycles. These cycles go through minimums and maximums.

One of the ways to protect astronauts is to appoint what they call space lifeguards. Space lifeguards will tell astronauts when dangerous SEP’s are coming there way. One of the ways to protect astronauts from dangerous SEP’s is to build a thick material barrier between them and the radiation. On the moon, there is raw materials such as the soil which can be piled on top of the shelter to protect them from the radiation. The larger the barrier of material the more protection that is provided to the astronauts. The reason why the radiation blocking material isn’t just simply sent up in our rockets is because there will be a massive expensive payload due to the weight of the material.

Tunneling is also another option. The deeper you tunnel the more protection there will be provided during the potentially dangerous situations. The moon is the perfect practice ground for the situations before that 6-10 month flight is taking out to Mars.

The Johnson Space Center Team is also developing shielding methods that do not involve using soil or regolith. These shielding methods will be very important while the shuttle is in transit since thickening of the haul is not really and options since is will increase the weight of the ship. This is just the beginning of a magnificent age of space travel. Just as shipping and air travel has become safer through the years, so to will space travel become as we test new methods and reach for the stars.

How To Handle Phone Radiation Coming From Next Door EMF radiation or phone radiation is something that you do have to deal with when you are in very confined apartment buildings or offices. You might not realize it, but this radiation can cause problems for you that will wreck your sleep and get in the […]